A+ A-
Print Email
A 4-day park at NAIA Airport turned into a P1,230 parking fee headache for Gino Caparas, a regular air user traveling locally and abroad. He claimed that prior to the increase in rates, he only paid about P150 for a 3-night parking ticket. 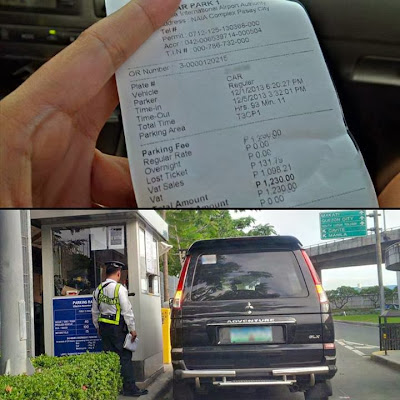 Known as the "World's Worst Airport" for two years in a row, NAIA charged Gino a thousand bucks for leaving his car in NAIA's poorly kept, terribly designed, and uncovered parking lot with questionable security for 4 days.

His complaint about the incident was shared in Facebook for more than ten thousand times already since posted on Facebook timeline last December 6.

Other netizens got ire of the incident but a lot of them also commented that the parking fee was just a "reasonable price".

Following is his status posted on his Facebook Timeline:

I just came back from a vacation in Singapore, and the first thing that greeted me as soon as I got my car out of the parking lot was a P1230 parking fee. That's right -- they charged a thousand bucks for leaving my car in their poorly kept, terribly designed, uncovered parking lot with questionable security for 4 days. Wow!

Let's lay down the facts: 1) I saw the announcement regarding the increase in rates last month, when we had our Iloilo trip. I said OK, P300 for leaving your car overnight sounds OK. So yes, I was informed. 2) My understanding was that they will charge additional P15 per day after a flat rate of P300. The charter was very poorly worded and not very visible. 3) I clarified the P15 per day charge to the person in charge of the parking booth as we entered the lot last Sunday. Itago natin sya sa pangalang dmarcos (kasi yun ang nakasulat sa ticket ko). 4) I only saw the proposed changes in the parking lot itself, not in social media or any sources online. I do not read the newspaper nor do I watch local news reports. The only means of traditional media I have is the car radio. 5) Prior to the increase in rates, I only pay about P150 for a 3-night parking ticket. The price increase was about tenfold.

Now why did I bring my car? I've always brought my car to the airport because 1) it's a lot more convenient than taking a cab to and from the airport, 2) Taxi lines can get veeeery long on certain days. It's a huge inconvenience. 3) Taxis in the Philippines are badly kept and you can never tell which taxi drivers can be trusted nowadays. 4) Taxi cab fares are expensive. 5) I don't have a driver; no one will bring me to the airport.

For P1230 I could have bought:
- A nice pair of sneakers,
- About 6 Big Macs,
- About 60 Cornetto Ice Cream cones,
- A week's worth of groceries,
- About 2 weeks' worth of fuel,
- A couple of Margaritas, a beer and a large quesadilla by a chill Mexican restaurant in Singapore, right beside Clarke Quay.

I was furious when the attendant charged me P1230. More than a thousand bucks for leaving my car in a crappy parking lot?! Apparently the P15 surcharge was per hour, not per day, as previously explained to me. I demanded to see the manager or supervisor. After waiting for a few minutes, 2 kind ladies approached me. The supervisor tried to explain the changes, which I already understood at that point, but I unfortunately they could not waive the charges. Supervisor said there was nothing she could do, it's government mandated, they're just doing their jobs. She also said the government (MIAA administration) owns the parking lot and she and the airport personnel had no control over it. All she could really do was apologize (which was nice of her, I guess, but the P1230 bill is still incredulous). Oh, and she also said I wasn't the only one who complained. I wonder why.

I couldn't take it. What was the point of her job when she couldn't do anything anyway (para saan pa trabaho mo kung wala ka rin naman palang magagawa)? I demanded to know who to complain to. She gave us a couple of numbers and emails (and I doubt anybody would respond to me if I had taken my grievances to them directly), and the MIAA website http://miaa.gov.ph/. No direct links or numbers to the head honchos whatsoever. I figured everything I said was useless at that point, so I just threw up my hands, paid the ticket and resolve to take my grievances to a public forum. Buti may pambayad pa ako after our trip. Pano naman kaya yung iba?

The increase in rates in the NAIA 3 parking lot was poorly executed and abrupt. I demand to know this: Why were the prices increased when I don't see any improvements at all in the parking lot? What was the justification behind those prices? I worked in Cebu Pacific from 2009-2010, and I've been traveling regularly since then, and the parking lot never improved. Employees used to be able to park there for free. They removed that benefit after a while. Now they're increasing it to staggering heights when they couldn't even add a decent shade for the cars! And to think we pay thousands for travel tax! Changi never even charged me for anything once. Everything was smooth and convenient for me. Such a stark contrast between Changi Airport and our very own Ninoy Aquino International Airport! Tell me, MIAA: where the hell does all our money go to?

We also do not have any forums or watch groups to protect us from these draconian changes (except maybe Bantay.ph http://bantay.ph/. Not sure if this is within their scope. Help?) Ms. Supervisor certainly did not know who to complain to (or maybe she was protecting her higher ups). I doubt anybody would really listen to us from the MIAA website -- I'm sure that site's just "maintained" by a small web design company anyway. We're a democracy, our voice counts, the people are the bosses. Tell me, who the hell ratified these changes? Who's benefiting from all the expensive fees we pay? We certainly aren't!

Thank you, Philippines, for giving me the perfect end to my vacation, and for constantly challenging my beliefs that the Philippines is worth all the trouble. I really want the Philippines to progress, but with all these boneheaded, abusive changes to our own policies, we're never gonna grow. Our airport is our gateway to the world -- if we can't fix it, the world will never see us in a good light. It's more fun in the Philippines? Bullshit! We need change, and we need it now! And I need my P1230 back!

Please share this until it reaches the MIAA administration or the mass media. We demand an explanation. They shouldn't get away with this. Fix the signages, repeal the increase in rates and start investing in improvements to NAIA instead of charging more. We would be very happy to pay if things are as beautiful as the airports abroad (see: Changi, Incheon, Kansai, HKIA), otherwise you're just stealing our money.

But the increase of rates in the parking fee overnight from P50.00 to P300.00 is somewhat not reasonable given that airport's parking facilities are poorly maintained and that no improvements to the parking lot were made whatsoever prior to the implementation of the new rates. 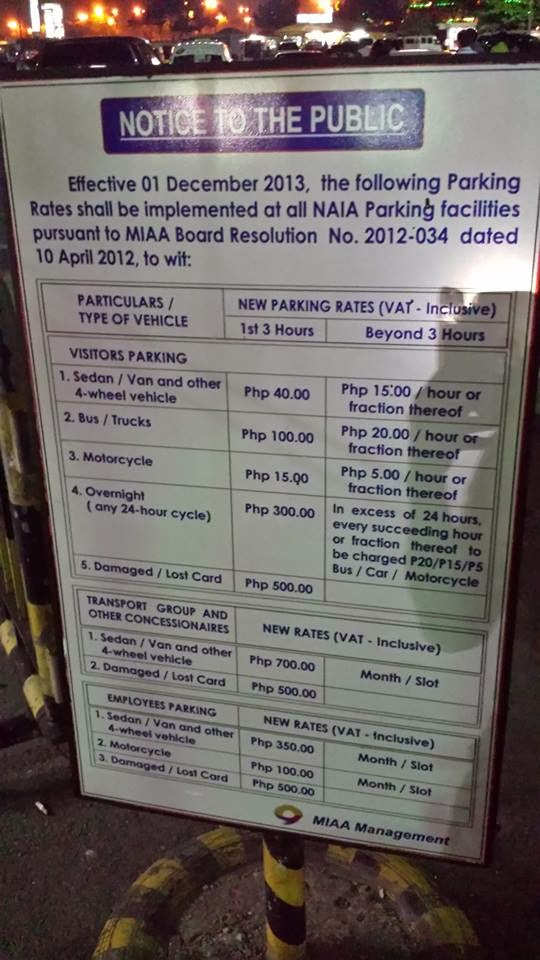