A+ A-
Print Email
A rogue Chinese fishing vessel that crashed in the Tubbataha Reef, one of the most famous barrier reefs located in the Philippines has amassed almost 4,000 square meters damage toward the century old coral. According to statements made by the marine park on Saturday, this has been a significant impact to the reef. 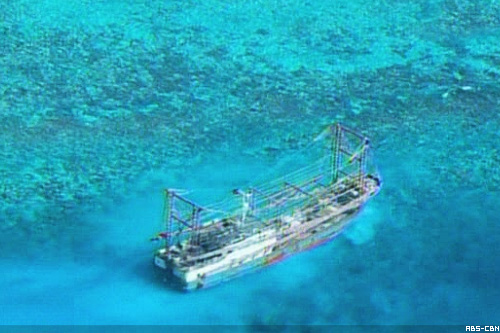 An estimate of 3,902 square meters (equalling to 42,000 square feet) of coral was destroyed as a result of the fishing vessel after it became stranded in the Tubbataha marine park, which is listed as a UNESCO World Heritage coral reef.

"The damage the Chinese vessel caused to the reef is heart-breaking," Angelique Songco, the head of the marine park said in a statement after experts had made a detailed analysis and assessment of the affected area.

Songco also stated that some of the affected area had been reported as over 500 years old, further adding to the damage to the reef. Previously a large area was destroyed when US Navy minesweeper the USS Guardian was stranded on Tubbataha in January 2013.

The 48-metere link vessel, carrying 12 suspected Chinese fishermen, speared its way through the reef on April 8. Authority inspection of the vessel revealed hundreds of dead Pangolins, an internationally protected species, hidden inside the illegal vessel.