A+ A-
Print Email
Twelve people were killed in a clash in Sulu where troops fought with militant groups responsible for the country’s deadliest terror attacks, according to the military. 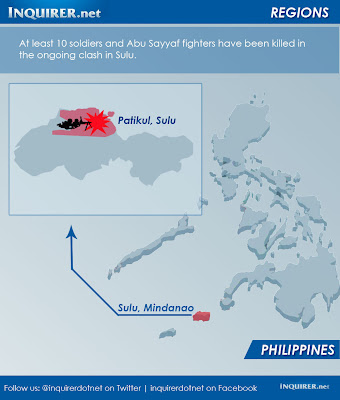 The fight last Saturday left seven Filipino marines dead and nine others wounded on the remote southern island of Jolo while seven members of the Abu Sayyaf group were also killed in the firefight, according to military spokesman Brigadier-General Domingo Tutaan.

"It was an early-morning firefight. Our forces were tracking those responsible for some recent kidnappings in the area, including the wife of a soldier," Tutaan added.

The wounded marines are being treated in a military hospital in the southern port of Zamboanga. None of their injuries was life-threatening, said Tutaan.

Colonel Jose Cenabre, commander of a marine brigade in the area, said a marine reconnaissance team under him was involved in the firefight. "The close-quarter combat resulted casualties on both sides," he said.

The Abu Sayyaf, founded in the 1990s using seed money from Al-Qaeda, is blamed for the worst terror attacks in the country, including the firebombing of a ferry in Manila Bay and kidnappings of foreign tourists. The group is included in the United States’ government's list of so-called foreign terrorist organisations.