A+ A-
Print Email
Facebook is reportedly testing a new feature which allows users to buy tickets in an events page.

Through the button “Buy Tickets”, Facebook Event Page owners who want to better promote ticket purchases, may re-direct visitors and users to a third-party website to purchase the tickets. 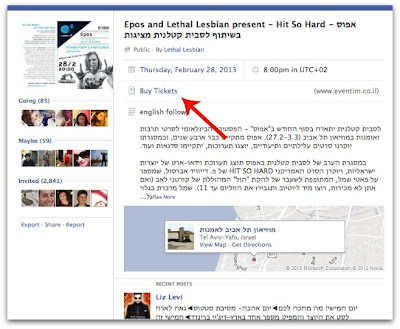 The button leads users to believe that Facebook could eventually integrate ticket purchasing much more deeply. It highlights Facebook's ongoing interest in making its social network a place for commerce, a strategy that could someday give rise to a full-featured ticket-buying platform.

As of this moment, the button has only been spotted in the Netherlands and Israel. Facebook confirmed it to technology news site CNET, stating that the Buy Tickets button merely replaces the previous option, a bit.ly link, that sent people offsite to the event creator's preferred ticketing destination.

Though it doesn’t sound like an enormous change, that small switch will no doubt affect a psychology in click happy Facebook users. It also makes going to shows with Facebook friends much easier as with only a couple of clicks, friends can be invited and the event may be shared to timelines. This prompts users to make a firm commitment of going out to a concert much faster.