A+ A-
Print Email
Last Friday morning an odd occurrence happened in the eastern region of Russia, with Chelyabinsk being the victim of a horrific meteor which crashed into the city, injuring over 500 people. 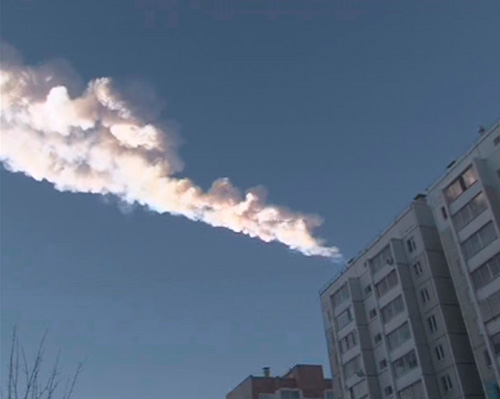 According to reports, the meteorite exploded in the sky and shot solid fireballs across the city, directly striking buildings, smashing windows and creating heavy debris.

Patrons on their way to work at 9:20am (0520 GMT) said they hear the sound of an explosion followed by a bright light in the sky, as well as the ensuing shockwave which impacted just 1,500km to the east of central city Moscow.

The large fireball of the meteorite could be seen for over 200 km away from its main strike location, spotted in the distant city of Yekaterinburg, just to the north of Chelyabinsk.

The damage caused by the explosive strike from the sky caused car alarms to go off, windows to shatter and the disruption of the mobile telephone networks.

This is the first meteorite crash of its kind to happen in Russia.

"There have never been any cases of meteorites breaking up at such a low level over Russia before," said Yuri Burenko, head of the Chelyabinsk branch of the Emergencies Ministry.

Russian emergency services were overwhelmed, with over 500 people seeking medical assistance, with 112 being kept in hospitals for further observation and treatment. A majority of those affected were injured by flying glass and other debris caused by the accident.