A+ A-
Print Email
Rappler on Sunday afternoon, November 11, released and embedded a screenshot of a letter of Kerry Kennedy to Senator Vicente Sotto urging the latter to apologize for using a passage from the speech of late United States Senator Robert F. Kennedy.

Ms. Kennedy is the founding President of the Center and has been a human rights advocate for the last 30 years. She is the former wife of the incumbent New York Governor Andrew Cuomo, according to Raissa Robles.

Kerry Kennedy is the fourth US copyright holder who has spoken out about Sotto's infringement on intellectual property rights of others and plagiarism. Senator Sotto was involved in infringing and plagiarizing of works of Sarah Pope, Janice Formichella, and Peter Engelman during his Turno en Contra speech against the Senate version of the reproductive health bill.


In addition, I am particularly offended to see a speech my father gave in support of global human rights distorted by Senator Sotto as an argument against the right to contraception. Expanding and protecting access to contraception is a global priority I have promoted for years, and limiting that freedom was in no way the topic of the 1966 Day of Affirmation speech.


Below is the letter on official stationery of the Robert F. Kennedy Center for Justice and Human Rights signed by Ms. Kennedy: 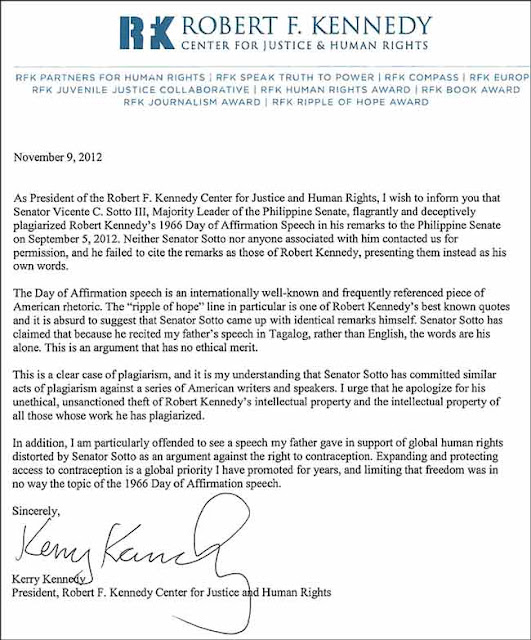