A+ A-
Print Email
A python measuring 13.2 feet was found at Light Rail Transit (LRT) 1 depot on Friday, November 23, creating panic among the LRTA employees. The following day a 10 feet python was also recovered from same junkyard of the depot. 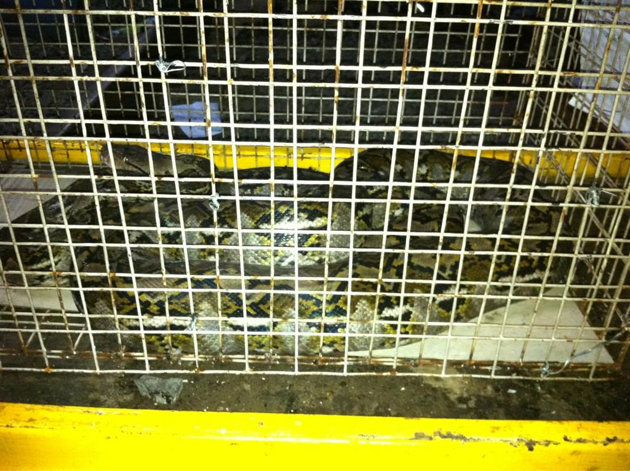 LRTA employees believed that these two large snakes are mates since they found a nest in the area with cat bones and snake skin.

The 13.2 feet python was found by tracks maintenance officer Ricky Tubongbanua while he was clearing a grassy area at the LRT 1 depot on Friday morning.

"I was shocked when the python’s head came out from the tall grasses. I thought it was going to attack me but it instead tried to jump away from where I was standing," Tubongbanua told the Inquirer in an interview.

According to Inquirer, the maintenance officer captured the big snake before it could move to the area near the engineering building of the LRT 1 tracks maintenance center. Tubongbanua said he had to ask the help of five co-workers to carry and transfer the 13.2-foot-long snake to their work station inside the depot.

LRT spokesperson Hernando Cabrera said that the pythons will be turned over to the Wildlife Bureau of the Department of Environment and Natural Resources on Monday, November 26.