A+ A-
Print Email
Korean comedian Ryan Bang, together with Kuya Kim Atienza and Angeline Quinto, shows a comic pole-dancing performance during the ABS-CBN noontime show "It's Showtime" October 24, 2012 episode. Aside from pole-dacing, he also tried an aerial dance. 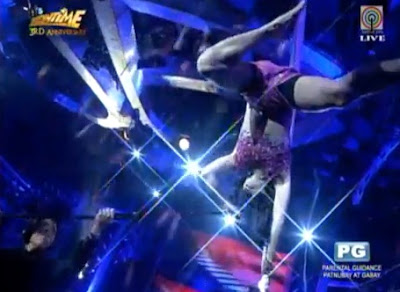 Their performance is part of the "Pasiklaban for a Cause" talent showdown of It's Showtime hosts in their 3rd Anniversary week-long celebration, which is a parody of Anne Curtis' winning act last year.

Here's the video of that act in It's Showtime's 3rd Anniversary October 24 2012 presentation: