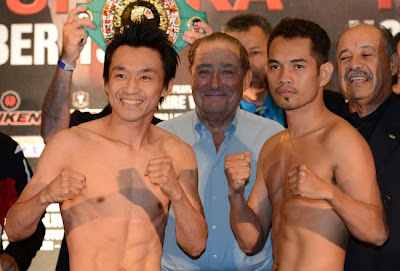 Age will be the biggest factor in this highly anticipated contest. Donaire is 29 years old and Nishioka is 36.

On Friday's weigh-in all main event fighters make weight on their first try.

Both seem respectful of one another with even smiles and Nishioka putting on a towel right away to stay warm during the stare down.

10PM EST (USA)
3AM London
10AM time in Philippines
Broadcast: HBO Boxing After Dark (in the U.S.)