A+ A-
Print Email
More areas are under public storm warning signals as Bagyong "Ofel" (international codename Son-Tinh) is now in the vicinity of Siargao Island and has accelerated while moving towards Southern Leyte Wednesday afternoon, October 24. 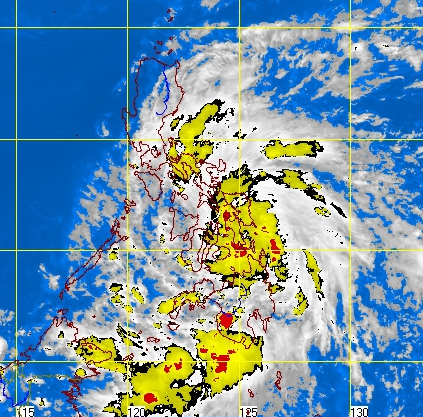 As of weather bureau PAGASA's 11 am severe weather bulletin on Wednesday, October 24, Ofel's center was last spotted in the vicinity of Siargao, Surigao del Norte (10.1°N, 126.0°E), with maximum sustained winds of 65 kph near the center and gustiness of up to 80 kph.

The state weather bureau forecasts that Bagyong Ofel will continue to move toward the west northwest at 19 kph and is estimated to be vicinity of Roxas City by Thursday afternoon; 180 km West of Nasugbu, Batangas by Friday afternoon; and outside the Philippine Area of Responsibility by Saturday afternoon.

(61-100 km/h winds expected within 24 hours) In these areas, moderate damage to agriculture can occur, particularly to rice and corn; houses with light roofing (nipa/cogon, old galvanized iron) can be unroofed.

Public storm warning #1:
(30-60 km/h winds expected within 24 hours) Estimated rainfall amount is from 5 - 20 mm per hour (moderate - intense) within the 500 km diameter of the Tropical Storm.

PAGASA warned the residents living in low lying and mountainous areas under public storm warning signal (PSWS) #2 and #1 against possible flashfloods and landslides.

Residents in coastal areas under signal # 2 are alerted of possible storm surges.

Fishing boats and other small seacrafts are advised not to venture out into the Eastern Seaboards of Southern Luzon, Visayas and Mindanao due to the combined effect of the Tropical Storm "Ofel"and the Northeast Monsoon.

The public and the disaster coordinating councils concerned are advised to take appropriate actions and watch for the next bulletin to be issued at 11 AM today.

The next bulletin for Tropical Storm Ofel will be released at 5 pm, today.