Won't Last A Day Without You is Trending Worldwide

A+ A-
Print Email
Won't Last A Day Without You, an upcoming romantic comedy movie co-produced by Viva Films and Star Cinema, is trending worldwide on micro-blogging site Twitter. It occupies the top spot both for the Philippines and worldwide trends. 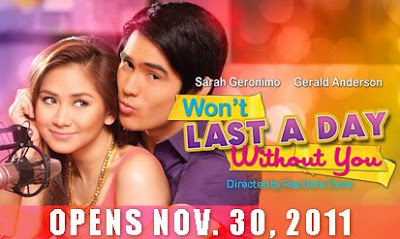 The film was directed by Raz Dela Torre. It stars Pop Princess Sarah Geronimo and Primetime Drama Prince Gerald Anderson and is their second on-screen team-up of both actors after a P120.21 million box-office gross on their first movie "Catch Me, I'm in Love" early this year.

The film opens in theaters nationwide on November 23, 2011.