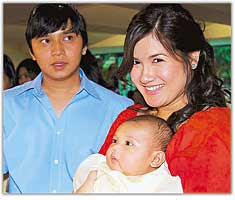 Reports said Camille was by his side when he passed away. He would have been celebrating his birthday on October 12 but did not reach his 32nd birthday after battling such cancer for a year.

The wake will be at Heritage Park, Fort Bonifacio but the interment date has not yet been confirmed.

They got married via civil rites in Los Angeles, California in 2008. Two years after, they got married at the Santuario de San Antonio in Makati City.