A+ A-
Print Email
In our article written last June 11, Junrey Balawing, Filipino, is expected to be crowned on his 18th birthday in Sindangan, Zamboanga del Norte the title "The Smallest Man in the World". We also reported that Junrey will not only be the shortest living man on earth but he will also hold the title of "Shortest Living Man in History". 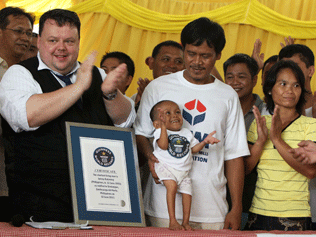 His initial height before Craig Glenday, editor-in-chief of the Guinness Book of World Records, measured Balawing's was 22 inches. Just recently today that Glenday told Associated Press and journalists that Junrey Balawing is "the world's shortest man".

A lot of wishes, as he celebrated his birthday today, June 12, came out from comments of readers from thousands of websites. Wishers wish him "good luck", "good health" and "long life".

Junrey will soon travel to other countries including Europeans and the United States and make some special TV appearances. 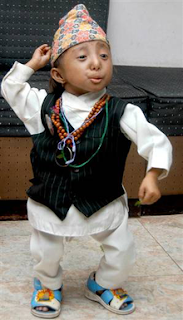 Min Bahadur Rana Magar, chairman of Khagendra's foundation, congratulated Junrey Balawing on his title. He told the Associated Press via Yahoo! News that "Khagendra's record was a blessing for him and his family. He entertained everyone he met with his dances and quirks."

Khagendra Thapa Magar, born October 14, 1992, 67 cm or 26.5 inches tall, and formerly the shortest man in the world, made something financially tangible for his parents using his title.

"Khagendra's stint as world's shortest man saw him travel to more than a dozen countries and make special television appearances in Europe and the United States."

"He had also become the official face of Nepal's tourism campaign, which featured him as the smallest man in a country that is home to Mount Everest, the world's highest peak," Associated Press added.

Watch video of him below: