UPDATE 2: Animal Kingdom takes the win at Churchill Downs. According to SB Nation, the horse, ridden by jockey John Velasquez, made a furious charge after the final turn to bypass Nehro, the place horse, and Mucho Macho Man, the show horse. Here is what our horse racing expert, Matt Gardner, had to say about Animal Kingdom.

UPDATE 1: The 2011 Kentucky Derby will also be LIVE streamed online, with NBC showing a simulcast on its official website. The NBC Online Simulcast of Kentucky Derby 2011 can be accessed on this LINK. 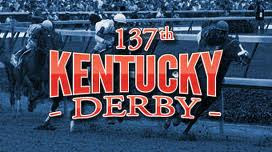 The first jewel in the Triple Crown, the Run for the Roses offers the largest purse - $2,000,000 - bringing out all of the best 3 year-olds up to the challenge, according to chiff.com.