A+ A-
Print Email

Janet Pichon Hixson, who hails from Davao, also won the Best National Costume award. She wore a traditional “Peacock-inspired” Mindanao gown, designed by Barba Martelle of Davao City that captivated the judges and the audience.

In the talent portion, she danced the tango with her husband, Richard Hixson.

Janet, a 33-year old mother of two, is also one of the active volunteers/supporters of the Migrant Heritage Commission (MHC), an acclaimed service-oriented non-government organizations in the US, that helps immigrants and ‘kababayans’ in need.

Janet, the daughter of Edgar and Elma Pichon of Davao City, first came to the United States in July 1999. While growing up in the Philippines, she attended the Mindanao Medical Foundation College as a student of Dentistry.

Her father and grandfather were elected city officials. Janet continued her family tradition of service by being elected Youth Counselor for her district in Davao City.

She developed programs for teenagers emphasizing sports and school activities as an alternative to drug abuse.

Janet was also elected President of the San Jose Youth Association, an organization affiliated with the San Jose Catholic Church dedicated to the spiritual development of teenagers through community activities and service through Christ.

During her reign as Mrs. Asia-USA, Janet said she would focus on her charity, The Street Foundation, which is dedicated to the improvement of the living conditions for impoverished Filipino children and creating the skills necessary for their success as adults.

Janet currently lives with her husband and children, Lyndzy and Lamoine, ages 5 and 10, in Charlotte, NC.

As a full-time housewife, Janet enjoys shopping, gardening, dancing, Karaoke, cooking, traveling, and family activities. On top of these, she is also a full-time student, continuing her studies in dental sciences, and a member of the Board of Directors of her community Home Owners Association.

Janet plans to visit the Philippines during her reign as Mrs. Asia USA. She intends to donate her National Costume to one of the Art Museums of Mindanao after her reign so that Filipinos can appreciate this beautiful work of art.

The Mrs. Asia-USA Cultural Pageant is the premiere showcase for Asian women in the United States, who trace their ancestry to the 58 countries considered part of the Asian continent.

The pageant presents the final 12 delegates that will compete in various categories such as the evening gown competition, national costume, the talent showdown and personality competition.


Results of the 2010 Miss Asia-USA and Mrs. Asia-USA
Congratulations to our new queens for 2010! 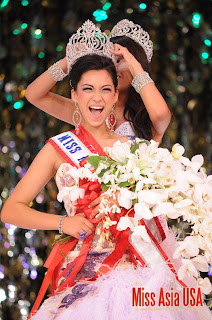 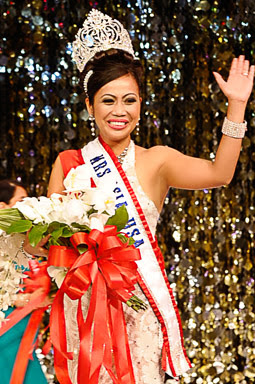